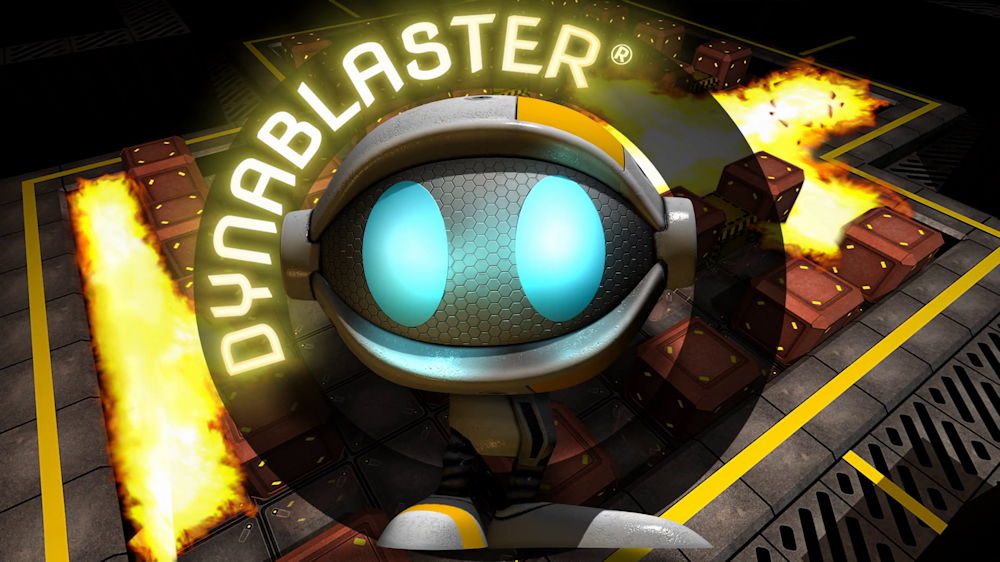 Dynablaster – The legendary Bomber is back! You loved the original and now experience multiplayer Dynablaster online. That same great gameplay with detailed level design plus character customization and modern style.

Watch out the bombs! 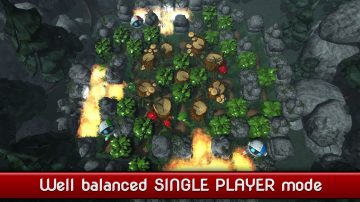 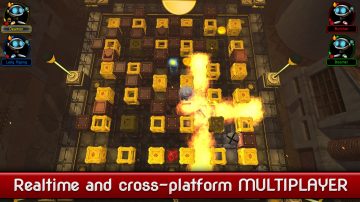 Fight head-to-head with your friends or play random online opponents. Up to 4 players. Realtime and cross-platform multiplayer. 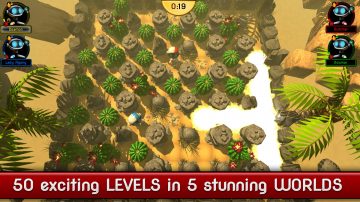 VARIOUS WORLDS WITH MANY DIFFERENT LEVELS 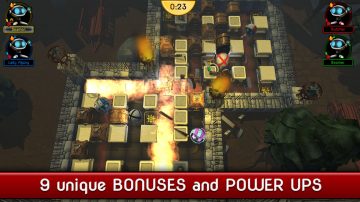 Find and collect bonuses, which increase a chance to win! 9 unique Bonuses and Power-ups 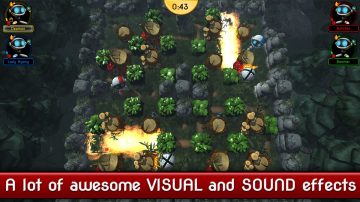 DROP A BOMB AND RUN Store your scores and stats. 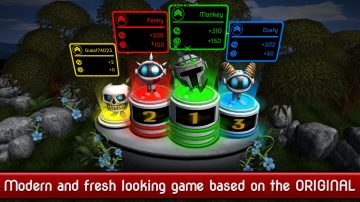 BE THE BEST AND BECOME LEGEND

Challenge your friends and find Your or their limits in more than 20 ranks from Recruit to Army Genreal. Become a Bomber in virtual reality 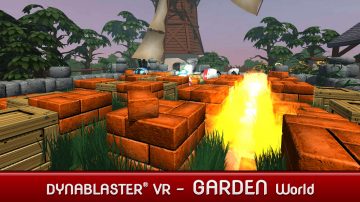 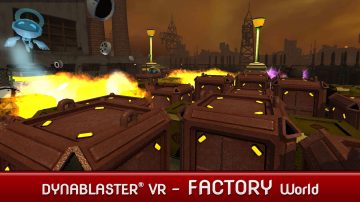 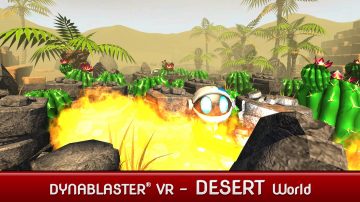 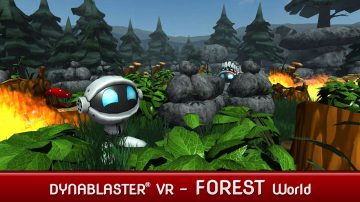 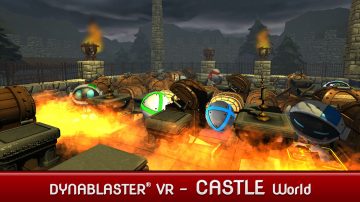 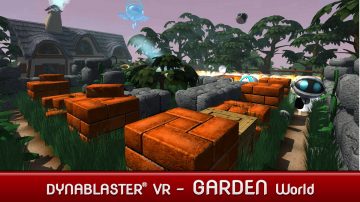 Go ahead, make your day!

Easy as piece of cake

The goal is just as simple as it can be “Seek and destroy all enemies” plus destroy obstacles to clear the way and collect PowerUps.

Use the action button to drop the bomb.

When you find special power up then you have to press the second action button to use it.

Power ups are hidden in the “boxes” so you have to blow them up too to find and collect.

Aren’t you fast enough? So try to drink a nitro and become fast as lightning.

Flame makes your bomb more effective and give them higher detonation energy.

As more bombs you will pick up as more you can drop then.

Beware of glue, since Wherever you place it, everyone will get stuck.

Shield will make you invulnerable and what could be better ?

Wet bombs can’t explode I bet so go and find some Clouds and try to disarm opponents bombs.

TNT is a mass destruction weapon and so beware of standing too close!

Jump in then jump out! Teleport moves you back to your starting point.

Place a mine by the second action button and keep in mind that it can kill you too!

Who wouldn’t like to become invisible time to time? Are you ready to play like a spy?

Don’t get sick because it can slow you down or speed you up or other accidental disadvantages. 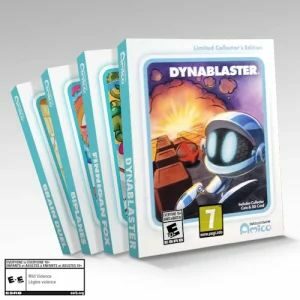 Isn’t it true that your fondest memories of playing video games are when you played together in the same room with a group of people? Much has changed in gaming since Intellivision began, with games becoming more isolating, complicated, and competitive. Using technology, creativity, and unrivaled passion, our team is on a mission to bring family and friends together again.

LIMITED COLLECTOR’S BOXED EDITION BUNDLES – Each boxed edition comes with a 3-D lenticular card, premium metal coin, and an RFID game card that will automatically activate once each title is available in the Game Shop. Quantities are limited – don’t miss your chance to own a piece of gaming history! 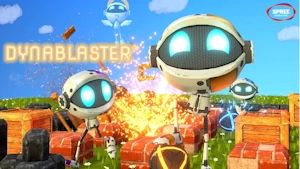 SPREE Interactive, a specialist in multiplayer free-roam VR attractions for the location-based entertainment market, announces the newest active virtual reality solution based on the original legendary online and console game, Dynablaster®. As an addition to the SPREE Interactive Family-Friendly Games Pack, the globally renowned title licensed by BBG Entertainment involves strategic thinking and energetic movements for players to achieve the highest score in the action-maze.

SPREE Interactive’s VR remake contains a controllerless added twist to the game’s core features of planting bombs near opponents and crates to succeed with the highest score. To plant bombs players must squat low, the longer the squat the bigger the bomb gets. Following that, players may choose to jump high and kick it off near an opponent or crate to score points.

“We took the classic gameplay from the original and transformed it into the virtual world,” says Sarah Stief, Head of Content. “With additional features, such as rolling bombs and an ultra-dynamic VR environment, the game has an added layer of complexity making it even more strategic and competitive.”

In partnership with BBG Entertainment, developer of the legendary Dynablaster, SPREE Interactive includes the original intuitive gameplay to produce a high-energy game combining strategy and skill in the virtual world. 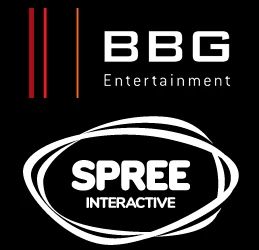 “SPREE Interactive’s unique tracking technology allows for a remarkable immersive experience, and this made it a very secure decision to entrust them with production of Dynablaster in VR,” says Stephan Berendsen, President of BBG Entertainment GmbH. “We are excited that our partners at SPREE had the vision to bring our bomber game into the multiplayer VR world and that they have stayed true to the original.”

As a highly addictive addition to any venue, players will want to play again and again to improve their scores. With extra features, such as rolling bombs, SPREE Interactive has added additional layers of excitement and intensity to the original game. Dynablaster is suitable for ages 8 and above and enables venue spaces to enhance existing entertainment offerings and widen their audiences.

Spaces from as small as 6x6m can be transformed with Dynablaster and the SPREE Arena. The fast turnaround and high throughput lead to fantastic ROIs. Only one attendant is required for ten players which gives an impressive 200 players an hour maximum capacity (with the SPREE Arena 10 player version).

“With the release of Dynablaster we were looking to take the very best of classic console games and bring it into the future” says Jonathan Nowak Delgado, Co-Founder and Director of SPREE Interactive. “This addition compliments our library of games by adding a strategic games title that the whole family knows and can enjoy. We have found a balance between recreating classic games and designing breakthrough originals that all generations love”.

The latest version of the SPREE Arena along with Dynablaster will be on show at the IAAPA Expo Orlando in November. Recent tech advances such as the integration of the Pico Neo 3 VR headset, make for a stable and reliable attraction that consistently delivers over 2,500 plays per week from each client site. 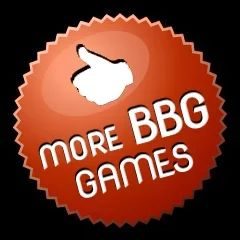 DYNABLASTER ® is a trademark of BBG Entertainment GmbH, registered in the US, the European Union and other countries.

You can find out more about which cookies we are using or switch them off in settings.

This website uses cookies so that we can provide you with the best user experience possible. Cookie information is stored in your browser and performs functions such as recognising you when you return to our website and helping our team to understand which sections of the website you find most interesting and useful.

Strictly Necessary Cookie should be enabled at all times so that we can save your preferences for cookie settings.

If you disable this cookie, we will not be able to save your preferences. This means that every time you visit this website you will need to enable or disable cookies again.